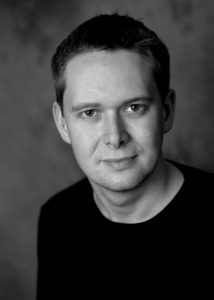 I’ve been lending my voice to things for almost 20 years, having started when I was a presenter on Ayrshire’s West FM.  I soon moved in to the station’s commercial production department, where I not only made the ads, but voiced quite a few of them too.

My voice has appeared on many commercials on Scottish radio and television.  You might also have heard me on corporate videos, awards ceremonies, in-store audio, or on telephone on-hold.

Audio and video examples are below.

I’m available on Audio TX IP/Cleanfeed/Source Connect Now and can record WAV/MP3 files from my own studio.
Studio kit: I currently use a RØDE NT1 condenser mic through a dbx 286s preamp/processor in to a Yamaha MG12XU mixer.

If you think I’m the voice for your project, please don’t hesitate to get in touch.

This website uses cookies to improve your experience while you navigate through the website. Out of these, the cookies that are categorized as necessary are stored on your browser as they are essential for the working of basic functionalities of the website. We also use third-party cookies that help us analyze and understand how you use this website. These cookies will be stored in your browser only with your consent. You also have the option to opt-out of these cookies. But opting out of some of these cookies may affect your browsing experience.
Necessary Always Enabled

Any cookies that may not be particularly necessary for the website to function and is used specifically to collect user personal data via analytics, ads, other embedded contents are termed as non-necessary cookies. It is mandatory to procure user consent prior to running these cookies on your website.